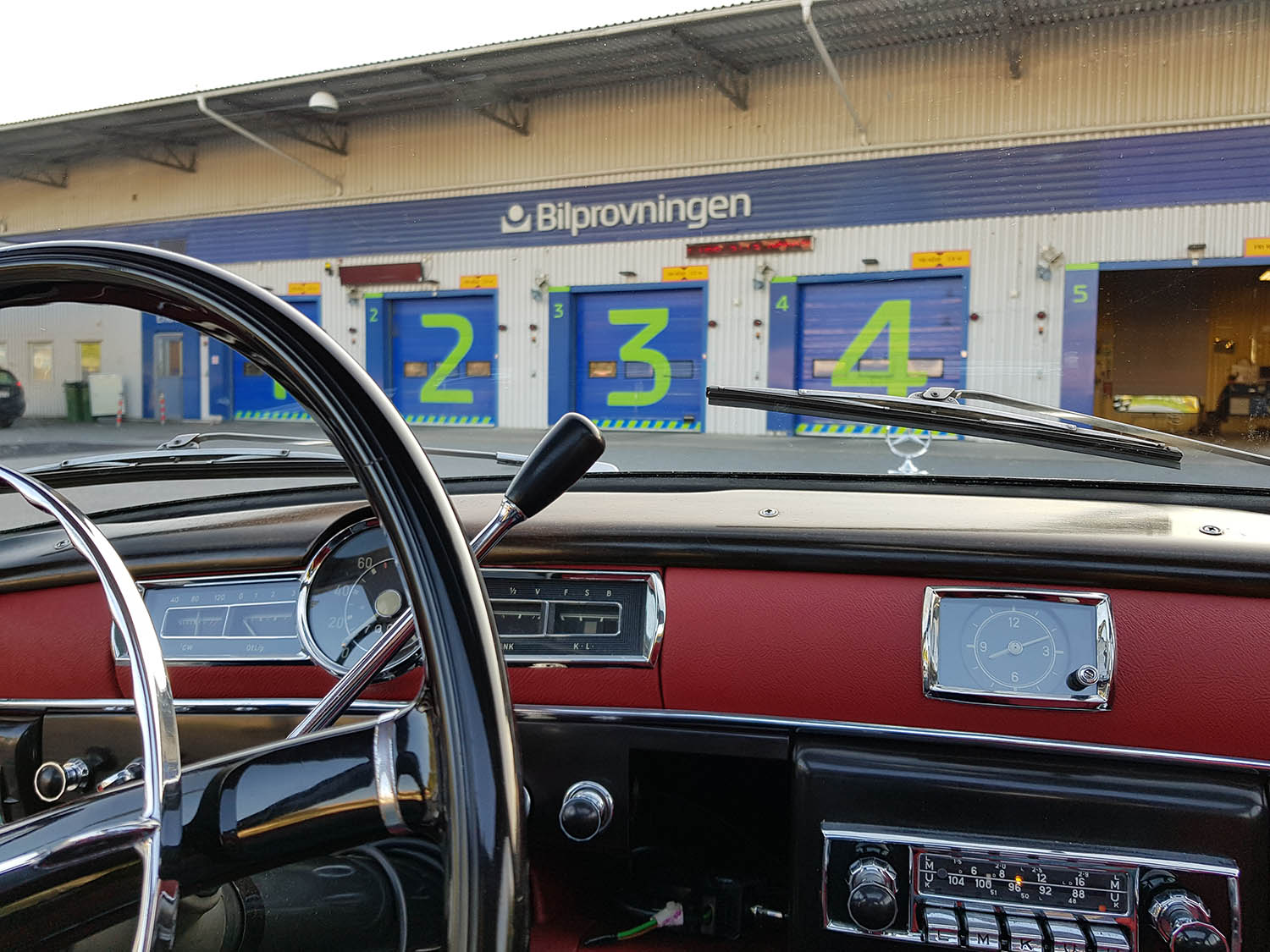 Everything was not finished, definitely not, but for the inspection I had reached a good-enough-level. The engine run like a sack of nuts but the emission levels were ok. The wheels were not perfectly aligned yet and I had a bit too much play in the steering. But good enough. Everything was double checked millions of times, all lights adjusted and working, horn functioning, warning triangle and fire extinguisher easily accessible and the car washed.

And off we went. Actually, when I drove there, the engine run even worse, stalling at every second red light. I was more than nervous due to this and that I would get an "evil" inspector or one who had no experience of how to handle the car. But the station I chose is “famous” for inspecting old vehicles so I hoped they would be able to treat the car well.

When the doors opened and old guy directed me I thought everything was going to be fine. However, he handed me and car over to a young guy. Fine, the old guy was on his back, but it was the young guy who was going to do the inspection. I didn’t feel comfortable when he asked "Eehhhhh, how old is this car?" I responded "62 years". He: "Oh damit, then it's older than my father!".

I made it very clear to him that the thing on the left side of the steering column, the distance flashlight blinker lever, was not a turn signal lever and that it was going to cost me a lot of money and work if he broke it (= "don’t touch it"). You may know that while driving an MBZ on Autobahn, you want to easily get slow "rubbish" like Beetles to move out of the way, so you need to be able to flash them quickly. There is no turn signal lever on a Ponton, instead there’s a turn signal ring in the middle of the steering wheel. None-returning… Despite this, he was quickly there and poked. I screamed at him and he didn’t touch it anymore.

Final wash before the inspection

Of course, one of the head lights lamps suddenly didn’t function (it came back on while driving home and has never gone out after that) but the old guy said it was ok, “For now”. But he was a bit more serious about the seat belts. In the rear they were fully installed and functional, but for the front seats I only had the inner brackets in place. The brackets on the B-pillars and the belts were not there since the B-pillar covers was not yet finished. If I hadn’t mounted the brackets everything would have been fine, but now I was halfway and that was obviously illegal. Nevertheless, the old guy let me through with a “I don’t really care but you may get problems with the Police, but that’s your headache”. The young guy was completely unaware of that old cars don’t need seat belts in Sweden.

First I had to teach the young guy how to handle the shifting lever, which sits on the steering column. He had never seen something like that before. The guy never managed to start the car, despite me telling him "turn the ignition on with the key to the right of the steering column and there is the start button, press it carefully and do not touch the gas pedal since you will make her sour". After several tries, we shifted seats and I started her up for him.

Next thing was to take the car out of the narrow garage doors and take a short test drive. He wasn't able to set the car in reverse gear. My god, I can still hear the sound of the gear box at night... I had to help him do it from the passenger seat. I had hoped that the old guy was going to take over, but he just stood there with a neutral face, looking at his apprentice. When they guy was backing out, with – as you may now – only a very small, internal mirror and a useless, equally small “make up mirror” on the left fender to guide him, the engine on 3000 rpm and the clutch slipping, I thought I was going to die. Seriously. Probably he as well.

Well, the rest went very well, and I got a “clean sheet”. I drove home, very happy. For the first time I could go on the highway. After having taken her up to 120km/h the engine run, almost, as it should. At least no stalling.

In Sweden you don't need to inspect cars older than 30 years. In my case I had to do it since the car hadn't been registered for almost 30 years. If I want to, I can re-inspect the car if I want to have it checked, something I will probably regularly do in order to ensure that she's road worthy. If I dare to...